Waking up in the supermarket car park in Perth on Friday morning, Mick asked how I'd slept. Pretty well, was the answer, with just a few minor disturbances. The nearby road was noisy, but not such that it kept me awake or woke me.

"There was a HGV that pulled in in the middle of the night." said Mick. I had a little think and did vaguely recall its arrival. A few moments later Mick opened one of the blinds and said "I wonder where it parked. I'm not sure I can see it." This was the view from that window:

Looking out of the window in Bertie's door. That's the side of the lorry parked a couple of feet away.

Once I'd extracted myself from under the duvet I nipped out to see how many lorries were parked up, in contravention of the prominent and plentiful 'No HGV Parking; £70 fine' signs (the only restrictions displayed in the whole, vast car park). It turned out there were only two vehicles in the entire section of the car park where we'd put Bertie: us and the HGV an arm's length away from us.

I'd like to report that once we were up we went and did something cultural, as I suggested we might. Alas, the weather was miserable and neither of us could be moved to walk the 20 minutes into the city in those conditions. The furthest we went was into the shop to buy a few things. Otherwise, we sat around a lot until, just after lunch, it felt like an appropriate time for the next leg of our journey.

I'd checked out my intended parking location in Glasgow on StreetView and was confident that we wouldn't have trouble finding a Bertie-sized space. That we did, but what you can't easily see on StreetView is whether a road is on a slope. There was one spot that was reasonably level, but I felt that we would have stuck out a bit too prominently parking there overnight, so we slept on a double-aspect slope (tail and left hand down) in a more discreet position further back down the road.

The bonus of parking outside of Queen's Park was that, for the third consecutive week, we were able to roll out of bed and arrive at a parkrun start line. The downside of parking outside a city park on a weekend (even though we were near the end of a dead-end) is that it wasn't as quiet a night as we would have preferred. We've had far worse nights though, and once again the convenience of the location made the disturbances worthwhile.

Fortunately, we'd recce'd the parkrun course on Friday afternoon, once the weather had dried and brightened (it was raining and dull on Saturday morning), so we got to see the view from the highest point in Glasgow, which lies within the park.

Taken in Fridays reasonably clear weather. The views were severely curtailed on Saturday.

The parkrun course runs past that high point, and as it's a 3-lapper, it does so 3 times. It's a couple of years since I last did a parkrun with that much ascent (Kräherwald and Seewoog, both in Germany are comparable with over 100m of ascent), and I was a lot slower this week than I was back then. It was still good fun, though - particularly the last 500m during which all the height is lost for the final time.

There's not much to say about the rest of the day, other than that it involved a lot of driving, and that we arrived at Ma-in-Law's in good time for showers (not sure why I'd completely failed to shower after any of my exertions over the previous 4 days!) before the Thai meal we'd ordered whilst driving down the M74, was delivered. 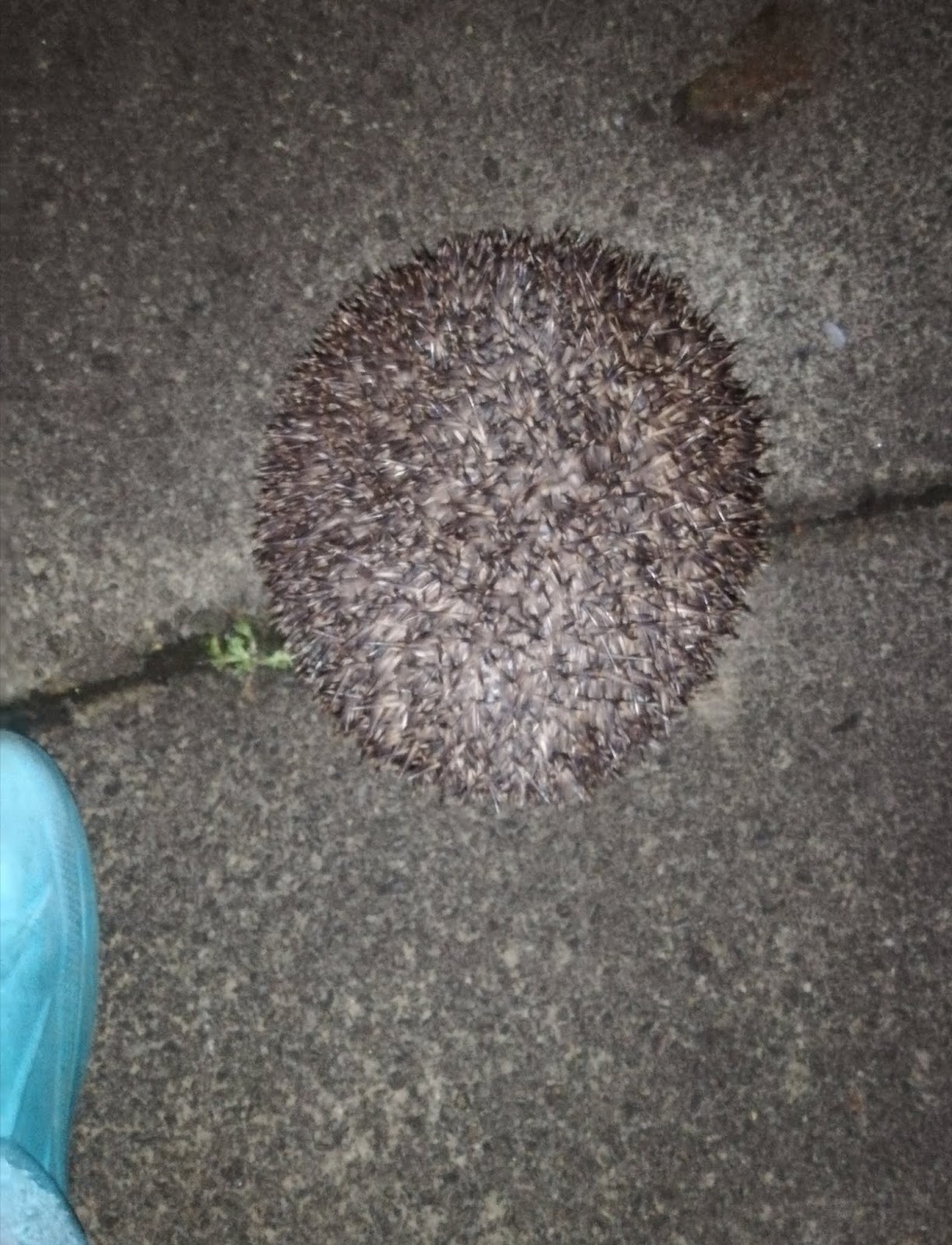 As we headed out to Bertie in the dark on Saturday night (because it's easier to sleep in Bertie on Ma-in-Law's drive than it is to take in everything we need for an overnight stay) Mick tripped over this chap. (S)he'd gone by Sunday morning so hopefully wasn't injured by the accidental contact.

With Bertie booked in for an engine service on Monday, we were torn as to whether to go straight there, or  to go via home. Even though it involved more time and distance, we opted for the latter. The weather was such that, having arrived home at 1330, I had a load of washing out on the line by 1430 and it was dry two hours later. During those two hours I did something exceedingly uncommon: I gave Bertie's interior a thorough spring clean. It's not that I never clean him, it's just that I seldom clean everything all in one go. I was impressed at the end of it that: 1) it can take that long to clean a space that small; and 2) how good he looked!

With Bertie dropped off for his service (some 21 months after his last, but he did spend 12 months of that off the road), we had an unknown length of time, but not less than 3 hours, to kill in Madeley. Fortunately, there's a chain pub just up the road from the garage, and I've always found chain establishments to be quite tolerant of extended periods of loitering. Moreover, it was lunchtime, and I'd not made us a packed lunch because I knew we needed to kill time somewhere and lunch seemed like a good place to start.

"We're not serving food. We've got a gas leak." was the message we got whilst we were still crossing the pub's car park. This was not ideal!

A bit of tapping on my phone, and a 10 minute walk into town, followed by a good few minutes searching for the cafe that Google Maps told us should have been right in front of us, and we found ourselves in a little independent cafe. It turned out that they were pretty tolerant of their customers loitering for extended periods too (not just us; a group of regular customers were doing likewise albeit probably not for the same reason)...

Healthy eating. Forgot to take a snap of the slabs of cake with which we followed this.

...Even so, after 2 hours, we felt like maybe we were in danger of outstaying our welcome.

After three and a half hours, spread across two establishments, and entertained by four crosswords, the phone call came that Bertie was ready.

As for the leaking fuel tank that we'd asked them to look at, all that was done today was to confirm that it is leaking from somewhere on the top (yep, we already knew that!) and will need to be dropped to see what the problem is (yep, we knew that too). Seems that we'll need to book it in again for that to be done. In the meantime, we'll stick with only filling the tank 3/4 full.