Tuesday
Where was Erica? She had a rest day.
Weather: Not as wet as forecast, but a few prolonged showers in the afternoon.

With a forecast of rain, and with Mick having quite a bit of work to do, we planned nothing of note for Tuesday.

I needed to go for a 10km run, and also needed to post a parcel, so I opted to combine the two in a visit to Milnthorpe Post Office. The 'running' bit didn't come to fruition, not because of Monday's 50km, but because the daypack containing the parcel was too uncomfortable at anything other than a walk. So, a 10km walk was had instead, involving a foray onto a permissive path along the sea dyke, and the discovery that, contrary to how it looks on the map, you can't get back onto the road at the other end of the path.

I'd been back at Bertie for all of 3 minutes when the rain came. Good timing!

Wednesday
Where was Erica? She had itchy tyres and spent her time in Grange-over-Sands trying out three different parking spots (two free, one £1.20 per day).
Weather: surprisingly fine in the morning, but with heavy and prolonged showers in the afternoon.

Our running days aren't coinciding, partly by design so that we can each support each others longer efforts. Thus, Mick was to run on Wednesday but I wasn't. I still took the liberty of chosing the location, plotting him a route from Grange-over-Sands via Hampsfell Hospice. 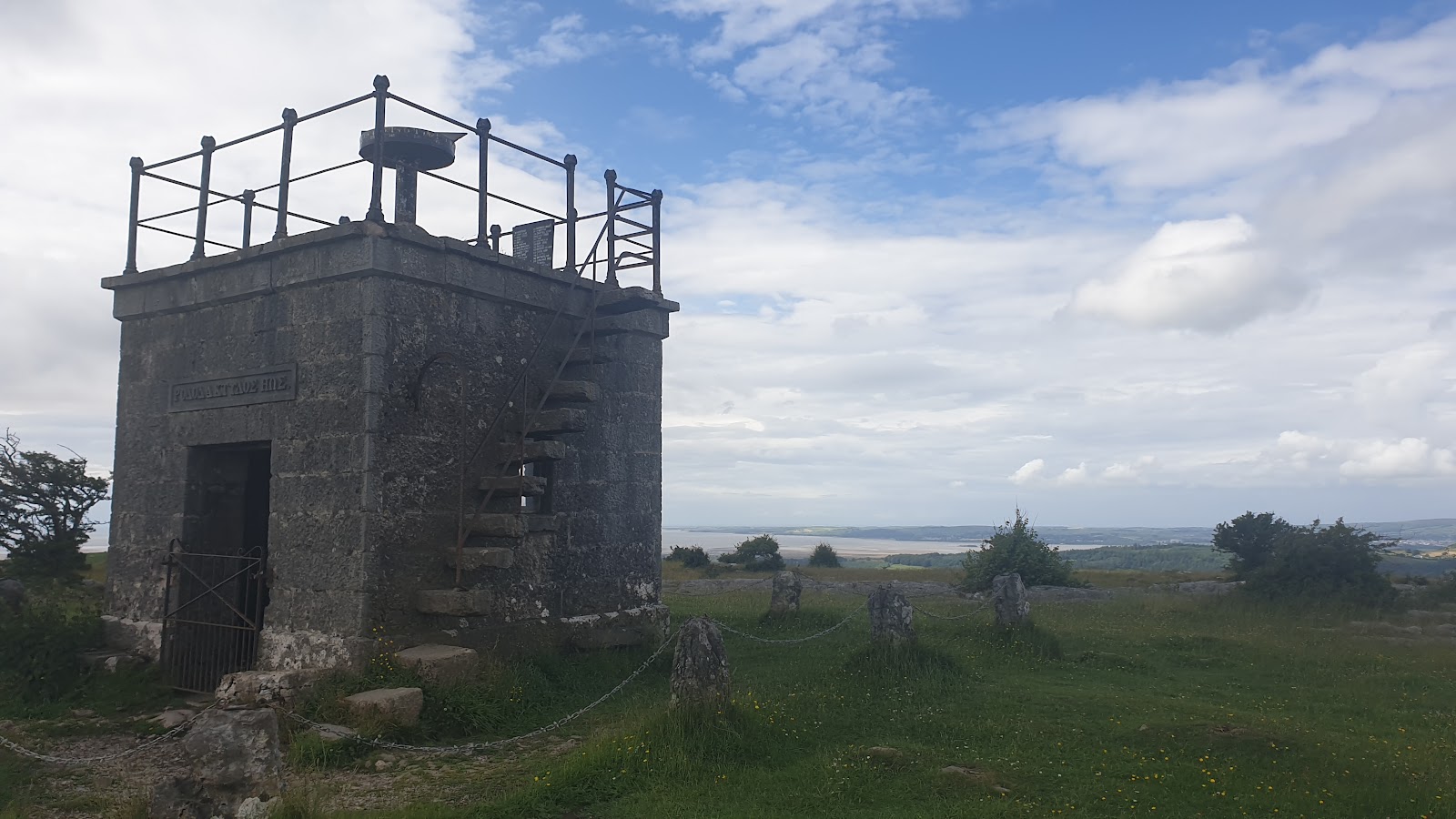 Hampsfell Hospice. I haven't yet tried to find why this hilltop feature is so called.

Whilst he did that, I took a walk along the promenade and through the town, enjoying in the former location the presence of information signs: I do appreciate being told something about the history of a place, or what I'm looking at.

We might have made more of the day, but in a repeat of my experience the day before, Mick had no sooner found me and Erica (in a different location from where he had left us) when the rain started and continued for quite some time. Once it eased, a walk was taken to a pie shop, but with the sky threatening to leak some more, we wrote off any thoughts of further activities in the area and pootled back to Bertie.

Two things of note happened once back: 1) in emptying Bertie's toilet we found that his cassette and cassette compartment weren't covered in wee! Did I mention this problem that had developed during our last trip? The not-entirely-fun half hour I spent at the end of last week, replacing the relevant seal* has cured the problem. 2) Two other motorhomes arrived within a minute of each other and both came and parked by us. This was surprising, as everyone else thus far has gone in the 'with electric' areas and we've had this entire field to ourselves. Whilst acknowledging that they had every right to join us (and neither was indecently close), I did grumble at now needing to close curtains before getting changed.

Not such a clear snap of it, but the tree gives some perspective. It's a V22 Osprey - an interesting aircraft that I'd not come across before. We've had a number of low-level fly-bys, with plenty of warning that they're coming as they've a distinctive sound signature.

Thursday
Where was Erica? She spent a few hours in a pull-in only about 2.5 miles from where Bertie is sitting, purely so that I could avoid 5 miles of running on flat road.
Weather: Mainly fine with just one short shower so far (albeit it rained quite a bit overnight again).
Mick had more work to do and I had another 22km to run, so I opted to do that locally, choosing a route that would take in two features that had jumped off the map at me: Dallam Tower Deer Park and The Fairy Steps.

At first I only saw sheep in the Deer Park and thought I had been missold, until I passed this group.

The Fairy Steps, where I nearly got licked in the face by a young, overly-friendly bulldog as I emerged at the top

I felt that I should have been able to see Bertie from this vantage point. Maybe he was hidden behind some trees.

Exactly half way through the distance I was looking at the map, trying to decide where to go next, when it occurred to me that the easiest option would be simply to retrace my steps. So, back up to the Fairy Steps I went, albeit I took the bypass path on the way back. Even so, I nearly came a cropper on some wet, shiny limestone further down.

A trip via Booths had me ripping into an iced bun in a somewhat uncouth manner before I'd got more than a dozen paces out of their door (the outing took me longer than expected and I'd underprovisioned), and I feared that the detour was going to cause me to catch some rain. But no, once again, it held off until I was back. We can't continue to be this lucky!

As for our neighbours, they've both left and we're back to having this field to ourselves. Not sure how many caravans there are in the other two fields, as I keep seeing them arrive, but am generally out at departure time (context: I'd have to step out of the door and walk, ooh, maybe 20 paces to see, but I haven't been curious enough to cause me to do that).

(* I was meant to buy that seal as soon as we got back from our last trip, but forgot until we started packing for this trip. As a result I ended up spending £12 on the new seal and £9.40 on next day delivery. Ouch! That'll teach me not to check my to-do list. Even so, it was worthwhile for not having to mop up wee spillages.)
Posted by Gayle at 07:41