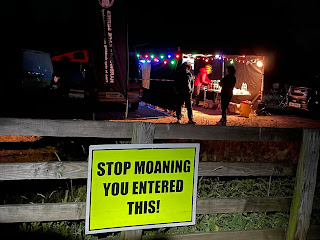 In Part 2 I listed the things that did go to plan in our race. Unfortunately, the list of things that didn’t go to plan is rather longer and is set out below. Mick has commented in proof-reading this post that it comes over as entirely negative and like I had a miserable time. Well, it is entirely negative (see Parts 2 and 4 for the positives!) and I did have a miserable time … whilst at the same time having a reasonable degree of fun (yes, that is possible). If Mick was to write a similar set of posts then there would be much more positivity, because many of the issues that affected me didn’t affect him. Anyhoo, here you go with…

Things that didn’t go to plan:

Loitering in a layby with a broken bus 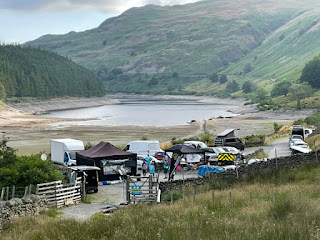 Not my photo, and thanks go to whoever took it. It's Mardale Head CP before it was beseiged by competitors. Look how low the water in Haweswater is!

(*We arrived at Mardale Head at 6pm. The next bus was scheduled to leave at 11pm and it’s advertised as a 3-hour journey back to Coniston.) 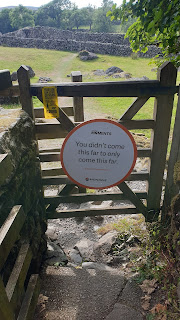 One of a series of motivational signs on the way into Kentmere.

Oh dear. What a tale of woe! I'll be back in Part 4 with some more positivity.