(Doh! Another post written some time ago that I failed to publish)

Where was Bertie? He spent the week in the car park of the Park Hotel in Montrose.

Weather: Still unseasonably cool (many days with a daytime high of 14 or 15 degrees), but dry.

We weren't needed in Montrose on Saturday, which gave us the whole day to travel the 2.5 hours from Newtonmore. On that basis, we could have had a nice long lie-in and recouped some of the late nights. However, Mick was also due a long run, so I sprang out of bed at just gone 5am to make him some breakfast and chivvy him out the door, as he needed to be done by early afternoon so that Bertie could be extricated from Newtonmore Hostel's driveway (definitely a 2-person job) before the hostel's new guests arrived that afternoon.

I joined Mick for the final section of his run, hence the action shot.

An adductor strain caused Mick to cut short, but having managed 40km of off-road trails it had already been a meaningful session.

An hour or so later Bertie breathed in and ducked again to squeeze back through the gateposts and under the rowan tree to leave the driveway. It turned out to be a trickier exercise (due to the approach angles) than entering had been (and that'd not been easy).

With more bodies than were needed for Challenge Control on what was due to be a quiet day, I excused myself for the early part of the morning and took myself out for an excursion to the lighthouse at Scurdie Ness, although my intended circuit became an out-and-back when I got put off by the combination of cattle and the need to pass through a farmyard. It turned out not to be a bad thing as on the return leg I met a chap who pointed out the dolphins in the estuary, and we had a good chat as we made our way back towards the harbour. 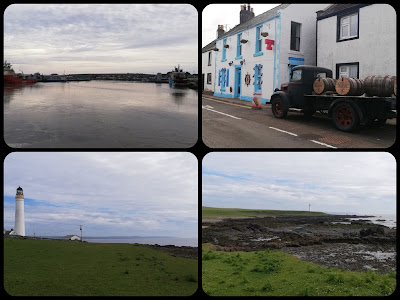 We continued to have more bodies than needed to man Challenge Control in Montrose, but it had been decided that, due to a number of factors related to Glen Esk, it would be beneficial for a satellite Challenge Control to be sited at Invermark for a couple of days ('Remote Control' as we dubbed it). Mick and I were nominated for the task on the Monday, and we set out late in the morning. In the afternoon, with some egging-on from Mick, I nipped up Mount Keen - a summit Mick had already visited on a TGO Challenge of his own a few years ago. 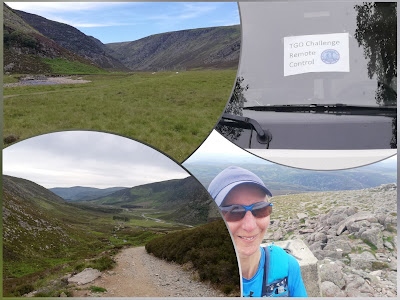 The first TGO Challengers finished their crossings and arrived in Montrose that evening.

Challenge Control had started the week in its usual location of the Kinnaird Room (on the first floor of the Park Hotel), but due to Covid considerations it made its scheduled move down to the Garden Room (a bigger room on the ground floor with two sets of external doors such that we could operate a one-way system and serve refreshments to Challengers in the garden). I failed to take a snap of the Kinnaird Room, but here's how we set up the Garden Room:

Strawberry tarts from Charleton Fruit Farm. Quite a few of these were consumed and they're bigger than this snap makes them look.

Challenge Control was getting busier with finishing Challengers signing in, receiving their certificates  and t-shirts, then being served cups of tea by Mick. Mick also did a good line in chatting:

The benefit of being outside: no need for masks. Whenever anyone other than those manning the desk was present in the Garden Room, masks had to be worn. 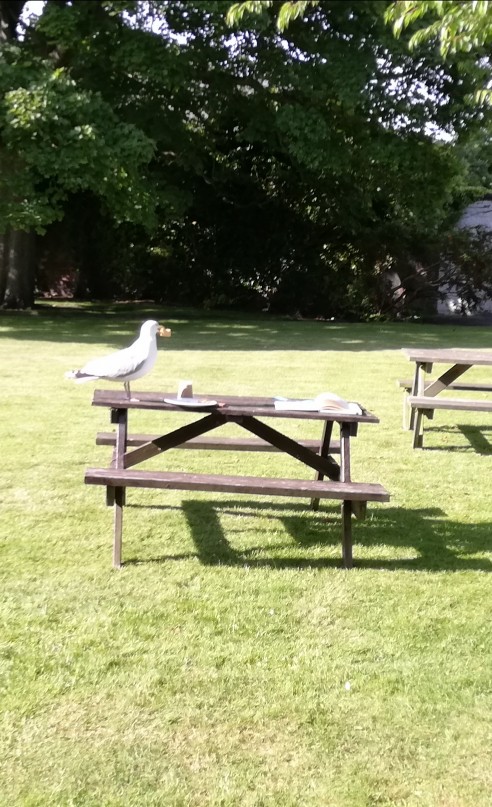 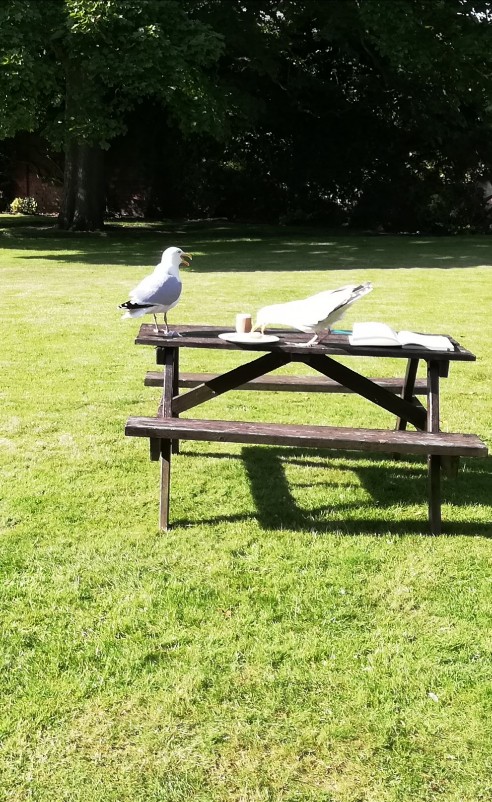 Don't leave the biscuits unattended! Turns out a seagull can swallow a custard cream whole.

The busiest day on Control with arriving Challengers ... except that it was another nice sunny day, which causes Challengers to loiter at their end-points, enjoy sitting outside cafes and the like. By early afternoon we were getting a bit concerned about how many were still due and (with a Covid-related limit on 3 Challengers inside Control at any one time) the logistical issues that could be caused by a rush. It all worked out just fine.

A tired Challenger succumbing to an under-table kip? A frantic search for the last biscuit? Or a bee-saving mission?

The final day of the TGO Challenge, and, my goodness, after a couple of late nights and early mornings, I was tired. Really tired. Ridiculously tired. I'd got as far as swinging my legs out of bed at 0730, to get ready to go for a run with Martin & Sue, before swiftly deciding that staying in bed for an extra half an hour was the better plan. I started my shift with caffeine.

The final two Challengers signed in at 1635 (the deadline is 1700) and within the hour Challenge Control had been deconstructed, with just a pile of rubbish to show for what had been before:

I promptly took myself off to bed, for a kip before the final dinner at 1930.

The dinner set-up also had to be different this year, with just small tables for 3 or 4 people (the 4-people tables involved one couple plus two singletons, so as to stay within the 'no more than 3 households' rule).

By good fortune (from my point of view; did I mention how tired I was?) a strict 11pm curfew was in force in Scottish hospitality venues, so whilst it was still a late night by my standards (although at least I didn't have dishes to do once we got back to Bertie, as we had at this hour the night before!), it could have been later.